Shannon and I are heading out tomorrow for our EIGHTY-SHOW TOUR. Goodness. See you in October! If you want to come to a show, find one here that looks good and let us know and we’ll get you hooked up with an invite. See you out there …

Here’s something new Shannon and I just put out. New full-length album coming June 17th, followed by an 80-show North American tour! If you want to come to a show, check the schedule and send me a message and we’ll get you an invite.

I finally get to share this with you guys! SO EXCITING.

This is the first song from a record that I’ve been working on for a long time, and which is near and dear to my heart. Christen and I started this album in October 2012! We’re just finishing up the mastering process right now. We’ve spent easily 1000+ hours on this record. We’ve produced it twice, mixed it twice, and mastered it twice.

As you might hope for a project approached with that level of persistence and detail, this whole record is brilliant. Of course I would say that, but seriously, it’s a great album. I can’t wait to share it with you in its entirety. But for now, enjoy this first song. You will be for sure transported to a magical place.

I mixed this record and did a little additional production. To have it debut here is a huge thrill for a massive NPR nerd like me. 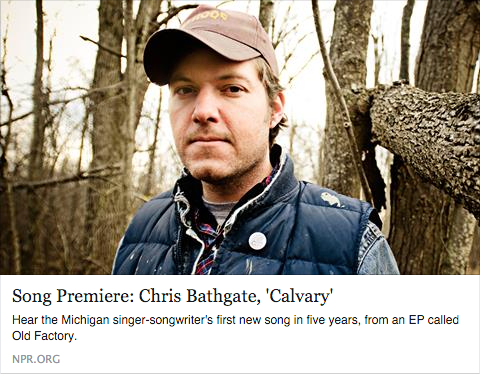 A couple of weeks ago, CD Baby published a little manifesto I wrote called “Sound Different”. It resonated with a couple of people, and it ended up being linked by ASCAP on the top of the daily newsletter they send out to 150,000+ people each morning.

And so then I started getting emails. I ended up hearing from a bunch of independent artists at varying stages in their growth. (You can write to me too, btw; talking with artists is one of my favorite things.)

Each conversation I had was different, but there were a couple of common threads, and I want to pull on each of them for a minute.

The first thing that I heard a number of different people expressing was a need for approval and validation.

I’m not talking about, “Can you give me your feedback?” but, “Do you think I’ve got what it takes?” I have a couple of thoughts here.

First: I am not an authority figure. And neither is anyone else when it comes to art. I have thoughts and ideas about things, and I have a certain set of skills. But I am not omniscient, and I am not an arbiter of What Is Good. No one is. Everyone has a different set of experiences that cause them to react in different ways to what’s put in front of them. You could be the world’s next great visionary, and I might just not get what you’re doing. (I’d like to think I would, because I like to imagine myself as a person with boundlessly good taste and infallible judgment, but let’s be realistic.) Do *you* like what you’re doing? Then keep doing it—just make sure you’re doing it 1000%. And figure out how to find the people who will also like it.

Second: I disagree fundamentally with the premise of the question. “What it takes” is a tremendously complex bit of math, and honestly it’s predicated more upon how hard you’re willing to work than on what innate or learned talents you might have at your disposal. I know lots of insanely talented musicians who have never gone anywhere, and we all can name dubiously talented people who have wound up rich and famous.

What I’m getting at is that there isn’t necessarily any connection between talent and success. Hustle rules all. Do you want to have “what it takes”? What it takes is a tremendous amount of hard work, applied unwaveringly over a duration of many years. Do you still want it now?

The second thing I heard, sometimes explicitly and sometimes implicitly, was the hope that I would be a magic gatekeeper. That, after hearing and approving of their material, I would be able to open that elusive door that would get them into the room where all the successful artists are hanging out. And here are my thoughts on that.

First: That room you are imagining does not exist. There is of course a celebrity culture inhabited by a very few successful artists, and yes they all do seem to know each other and work together and wow it sure does seem great. (Not to me, actually, but let’s pretend for a moment for the sake of the article.) But how many people are we talking about there … 100? 1,000? And how many independent artists are there in America right at this very moment … one million? Ten million? Probably closer to ten million. Statistically speaking, no one reading this article will ever be a household name. So you should not have that be your aim.

“Dream big” is great, but not when it turns into “dream stupid.” Realistic goals are important—you can actually achieve them. How about shooting for being a career artist making a comfortable middle-class income? You could do that, you know. That’s a realistic goal.

Second: No one is going to discover you. No one is going to swoop you up from your humdrum existence and turn you into a star. And, believe me, I get it. It can be monumentally frustrating and discouraging to feel like you have talent and you’re spinning your wheels and not getting anywhere. There’s got to be some easier answer to this, right?

But, sorry, no. There are no easy answers and there are no shortcuts. I wish there were. But really it’s just many years of hard work. To give you an idea, my wife has been working on her solo music career full-time since 2006. Just this year, she started to get a very small amount of national recognition. After 10 years of working full-time at it. Maybe in a couple years she’ll have a breakout song and she’ll be an “overnight success” … after 12 years of constant work.

I toured with Matt Nathanson a tiny bit, many years ago. His story is along the same lines. 15 years of unwavering work, and then massive “overnight success.”

(Astute readers will notice that this is the second time I’ve mentioned Matt in an article. This is because he’s a deeply good person who deserves every ounce of the success he’s worked so hard for, and he serves as an excellent example of diligence paying off. Yay Matt.)

I believe strongly that the people who end up succeeding are the people who just simply don’t quit. If you’re talented, and you keep working very very hard, something will eventually break. If you ram your head against the same wall for ten years, eventually the wall might give way a bit.

The good news is that this work is enjoyable. Figuring out how to make a career from music is challenging—which I happen to think is one of the best parts about it. Challenges are good.

It’s also very difficult. That’s why not many people have careers as artists. If you want it badly enough, you will figure out how to make it happen. Keep going, and don’t stop.

The third thing I heard more than once was this question: Do you know of any contests or shows that I could get on?

And here’s what I think about that.

First: I’m not going to come across an event or song submission idea. And I’m not going to hear about some contest. You’re welcome to ask, but I’ll have nothing for you in that department. The way I’ve structured my life, I don’t hear about those sorts of things.

Second: Even if I did hear of something like that, I wouldn’t tell you about it—and I mean this in a helpful way. Because those are false goals that I’m not willing to encourage you to put your energy towards. If an artist finds success, it won’t be because they got on a certain showcase or got a song in a movie and were subsequently “discovered” … it will be because they have worked hard to engage a strong community around what they’re doing.

Encouraging artists to seek out opportunities of that sort subtly reinforces the pervasive idea that artists aren’t ultimately in control of their own success or career path, and I reject that. It’s an American Idol mentality, and the people who achieve genuine lasting success via those paths are a rounding error when you look at the number of talented, deserving artists out there.

And, perhaps more importantly, when an artist adopts an American Idol mindset, they’re demeaning themselves and subjugating themselves to a faceless other. They’re diminishing their own sense of power and agency in their life. And that’s a terrible position to put yourself in.

I personally have a much more punk rock attitude about things in that I believe you can create your own success through hard work and engagement. In my experience, success comes to artists who manage to organize a community around what they are doing.

So if you’re reading this because you want suggestions on how to build your career, here are some suggestions. Build your story as an artist. Write constantly. Record constantly. Release material constantly. Put out at least a full-length album’s worth of music every year. Continually develop what you’re doing. Don’t take vacations; invest the money back into your career instead. Work every day. Perform all the time. Be consistent. Have a narrative, and do things that support that narrative. Do fundraisers as a means of letting people participate in what you’re building. DO HOUSE CONCERTS. DIY everything, and get good at all of it. Build your community. Your community is what will sustain your career financially in the short term, and is what will give you the platform to eventually expand your reach on a larger scale.

There is a pervasive lottery-ticket mentality among the independent artist class. Television has sold us the idea for a generation now that all you need to do to have a music career is to stand in line for 10 hours and sing in front of a panel of anonymous judges and then you’re on a contest and then you’re a famous recording artist! And yes, that does happen. We see it on TV. But is that going to happen to you? Statistically speaking, no. So you’d better get to work creating your own success. Because no one is going to do it for you.

Want to know next time I write something? Sign up here, and I’ll let you know:
[mailchimpsf_form]

This is very cool.

Our new friend Jenn Marshall runs a very cool organization called This Is My Brave. It addresses mental wellness in a storytelling setting. Shannon did a playing-along-live version of the “I Know I Know” video. It was very moving. And I left the house for the first time in a while! All in all a rousing success. 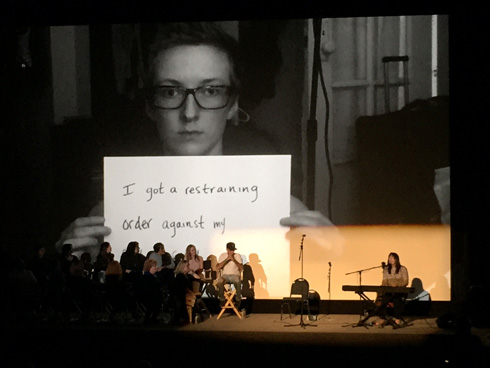 This is surreal, in the best possible way. Our new friend Martin Atkins – legend, childhood hero – has a new slide in his keynote presentation IN WHICH HE INSTRUCTS PEOPLE TO BUY OUR BOOK. If only I’d been able to see this in the future when I was 18 years old. So COOL. 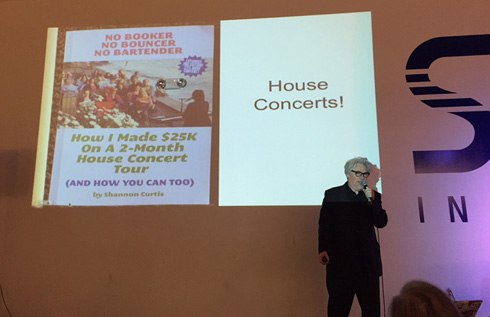 We’re FINALLY home from our summer and fall travels! Which means that I get to produce records again. How excellent. First up: a southern soul band from Dallas called The Gibbonses.

They’re a husband-wife duo … they have killer songs and the singer has a huge voice. We’re a couple days in and I can already tell this record is going to be super good. Very happy to be back doing what I love. 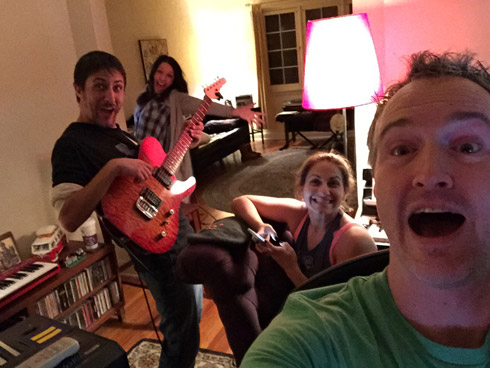